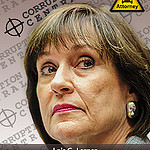 If you have been following me here on this site or on Facebook, you know that I am quite upset about the IRS targeting of groups that disagree with the administration. I honestly believe that the government should NEVER pick sides in politics. When politicians win, it should be a requirement that they cannot use their governmental power to hamper the criticism of them. Remember those Lois Lerner emails that conveniently went missing in a “hard-drive crash”? Judicial Watch, which is suing the Internal Revenue Service under the Freedom of Information Act, says they still exist.

It seems to me that the hijacking of the IRS to suppress grass-roots opposition to the administration in power would qualify as a “government-wide catastrophe,” but I am sure the government would disagree. That notwithstanding, if the backups are “too onerous to search” now, what good would they be in an undisputed catastrophe? One can never rule out incompetence as an explanation, but this does have the feel of a deliberate effort to keep the truth concealed.

From their press release:

Department of Justice attorneys for the Internal Revenue Service told Judicial Watch on Friday that Lois Lerner’s emails, indeed all government computer records, are backed up by the federal government in case of a government-wide catastrophe. The Obama administration attorneys said that this back-up system would be too onerous to search. The DOJ attorneys also acknowledged that the Treasury Inspector General for Tax Administration (TIGTA) is investigating this back-up system.

One thought on “So now the Lois Lerner emails are not missing?”