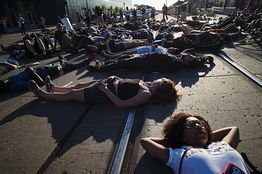 Of course, the second biggest lie of the summer (see below for the biggest lie) is that more guns will keep you safer. This is simply not true and defies logic. More guns are sold than there are legal gun owners. Why is this, because some of those gun owners are selling them to criminals. The manufacturers that make guns or import guns to the US survive on selling guns to illegal gun owners. Their market would drop in half and they would all declare bankruptcy if they could only sell guns to law-abiding citizens.

The great lie of the summer has been the Black Lives Matter movement. It was founded on one falsehood—that a Ferguson, Mo., police officer shot a black suspect who was trying to surrender—and it is perpetuated by another: that trigger-happy cops are filling our morgues with young black men.

The reality is that Michael Brown is dead because he robbed a convenience store, assaulted a uniformed officer and then made a move for the officer’s gun. The reality is that a cop is six times more likely to be killed by someone black than the reverse. The reality is that the Michael Browns are a much bigger threat to black lives than are the police. “Every year, the casualty count of black-on-black crime is twice that of the death toll of 9/11,” wrote former New York City police detective Edward Conlon in a Journal essay on Saturday. “I don’t understand how a movement called ‘Black Lives Matter’ can ignore the leading cause of death among young black men in the U.S., which is homicide by their peers.”

Source: ‘Black Lives Matter’—but Reality, Not So Much