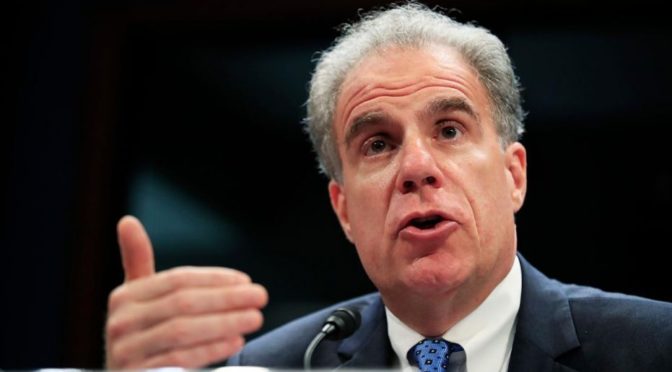 Inspector General Michael Horowitz: “On the one hand, gross incompetence, negligence? On the other hand, intentionality? And where in between? We weren’t in a position, with the evidence we had, to make that conclusion, but I’m not ruling it out.”  (ABCNews)
This is obviously sad. Both are bad. The hand-picked inspectors by the top management of the FBI were either incompetent or they were intentionally trying to affect the outcome of their investigation in one direction.
If they were incompetent than why were they hand-picked by the FBI management to run this investigation? Does that mean the FBI management is incompetent? If they were incompetent on this, the most serious investigation that the FBI has conducted in probably a decade (the investigation of members of the out-of-power party’s nominee for POTUS), then do we need to go back to every other investigation that these hand-picked professionals have conducted to see where else they have been negligent or incompetent?
If they were intentional, then they should be charged with treason for trying to use the police state powers to affect the out-of-power party’s candidate for POTUS. That is a treasonous act similar to the tactics of a fascist state. That is the same as saying that Obama was a fascist and I doubt that many Americans want to say that.
Did you see Comey’s interview with Chris Wallace? He essentially says the same thing but of course, he gets it backward. He said that if the problem was systemic than it was worse than if this was an individual situation.
If it is systemic than it is the FBI leadership that has allowed incompetence to thrive in the organization. Yes, that is very bad indeed. But is it as bad as being an individual situation?
If it is an individual situation than it is a case of the top law enforcement organization appointing its best investigators and those investigators try to use their police powers to upset the activity of the opponent of the party in power. That is treason. That is being fascist-like.
I don’t know Mr. Comey. You may want to say that you are consistently incompetent than to say that your hand-picked team of ace investigators are plotting police-state activities to disrupt the democratic election of our leaders. IMO, incompetence may be a better tactic to staying out of jail.
Twitter This