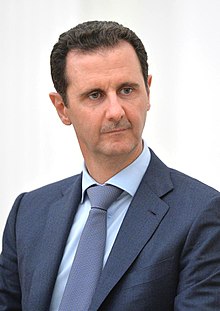 There is a lot of talk about what is an appropriate response to Syria’s mass killing of its citizens with chemical weapons. I think the solution is quite simple. The US doesn’t want to kill innocent life so we should simply give a list of 24 locations that will be destroyed sometime in the next 7 days. We encourage the residents of Syria to evacuate those locations and an area at least 1-mile perimeter around each location and explain that some but not all of the locations will be obliterated in the next 7 days.

I don’t care about 15 of those locations – they can be decoys for all I care about. The first location needs to be Bashar al-Assad’s palace in Damascus on Mount Mazzeh. It is his primary residence and the place that his family lives. Level it. The second location needs to be the old palace that Assad still sometimes lives in – Tishreen Palace. Once again it should be leveled to dust. The 3rd location(s) should be the home(s) of his brother Maher al-Assad. After that we should level the home(s) of Assad’s first cousin Rami Makhlouf. Then the homes of Ali Mamluk, Abdul Fatah Qudsiya, Rafiq Shahada, and Jamil Hassan (all part of his inner circle).

We should list those locations so that families and children (and workers and slaves) can be evacuated and not be killed because they had the unfortunate reality to be related to a tyrant. After that evacuation, just level their homes. Make this personal. No military targets after the tyrants killed innocent lives with horrible weapons.