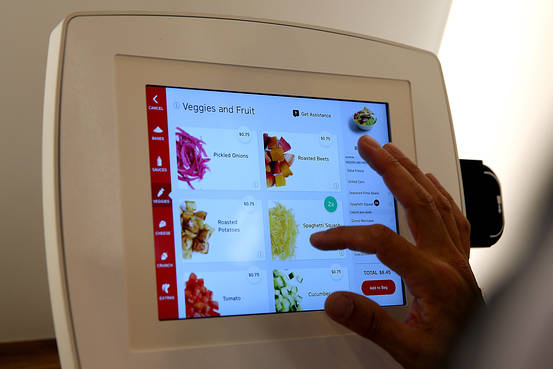 Consumer preferences, reduced technology costs and government policies that increase labor costs are driving a trend toward automation in the restaurant business. If you make something more convenient and less expensive, it tends to catch on.

As recently as the 1960s, gas-station employees would rush to fill your car’s tank, wash the windows, check the oil and put air in the tires. Telephone operators made your long-distance calls and bank tellers cashed your checks. Those jobs now are either gone or greatly diminished.

Today, we reduce jobs whenever we shop on Amazon instead of our local retail outlet, use an Uber app rather than calling a cab dispatcher, order a pizza online, use an airport kiosk to print boarding passes, or scan groceries. Each of these changes in behavior has increased convenience and reduced labor costs—and competitive businesses pass the savings to their customers.

Just like there are kiosks replacing airline workers that check you in to your flight, the restaurant industry is ripe for order automation.

I fly a lot. Several airports have automated their restaurants. In the Delta concourse (most of C & D) LaGuardia LGA, every seat with a table or counter has an iPad and a card reader in front of it. You order anything you want on the iPad from any of the restaurants in the concourse and it gets delivered to your table. They serve thousands of people simultaneously with a fairly small wait staff.

Minneapolis MSP has a similar set up in several of the remodeled areas.

When was the last time you walked into a bank to get some cash for the weekend? The ATM has been a fixture in the banking world for decades now. That automation has increased to include scanning checks on your smartphone, so even paper checks are no longer a reason to walk into a bank building.

In 2015, 14 cities and states approved $15 minimum wages—double the current federal minimum. Additionally, four states, 20 cities and one county now have mandatory paid-sick-leave laws generally requiring a paid week of time off each year per covered employee. And then there’s the Affordable Care Act, which further raises employer costs.

Dramatic increases in labor costs have a significant effect on the restaurant industry, where profit margins are pennies on the dollar and labor makes up about a third of total expenses. As a result, restaurants are looking to reduce costs while maintaining service and food quality.

Part of the problem is that those with technical skills make good livings, while those who don’t have those skills are being priced out of entry-level jobs.

The low-labor concept may be a harbinger of the future. If consumers prefer it, or if government-mandated labor-cost increases drive prices too high, the traditional full-service restaurant model, like those old gas stations with the employees swarming over your car, could well become a thing of the past.

Source: Why Restaurant Automation Is on the Menu